A BRIEF HISTORY OF JOCKSTRAPS

In researching this article on jockstrap history we found two different inventors of the jock strap, the first being Parvo Nakacheker of Finland.

This gentleman, apparently an athlete from Finland, claims to have done much of the pioneer work in developing the original athletic supporter and "devoted much time to the study of pure anatomy and the special demands of such an item."

The second and seemingly most likely jockstrap origin being the BIKE Web Company; who in 1874 invented the athletic supporter, quickly becoming known as the" BIKE Jockey Strap." Due to the fact that it was designed originally to support and protect the genitals of the bicycle jockeys who rode the cobbled streets of Boston at that time, over the years it has come to be known more commonly as the jockstrap.

Interestingly, Bike's first jockstrap was the now famous Bike #10 Jockstrap but a few years later, another company called Flarico created their jockstrap and called it the F110 Jockstrap.

Laying claim to the first hard cup supporter is Canadian company Guelph Elastic Hosiery from Guelph, Ontario. Although founded by Joe Cartledge, it was one of his two sons, Jack who being a "jock" developed the hard cup supporter and filed a patent for it in 1927.

Interestingly, one version of the jockstrap, sold in 1900 was the Heidelberg Electric Belt, a sort of low-voltage jockstrap claiming to be a cure for impotence, kidney disorders, insomnia, and many other complaints (The mind boggles!)

End of an era (sortof): Unfortunately, both Bike and Flarico stopped producing jockstraps in 2016. Luckily, Meyer Marketing, the European distributor for Bike had direct contact with the official Bike factory and now get all the Bike jocks made underwear the Meyer brand. Those are all available here at Jockstrap Central. 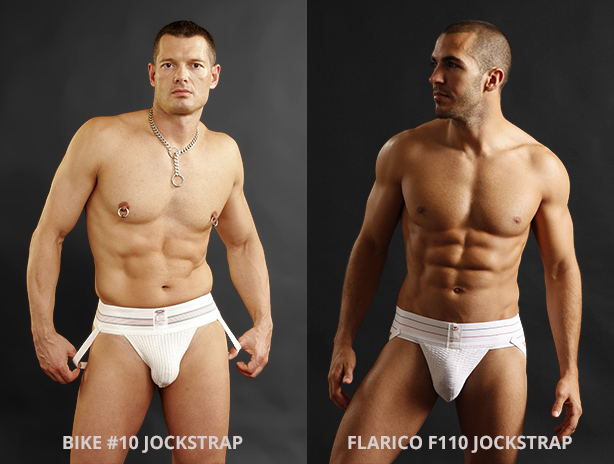 Athletic jockstraps traditionally come in two styles; with a 1 inch waistband (called a swimmer jockstrap) or a 3 inch waistband. Our Safe-T-Gard line has a knit elasticized pouch; this helps to control unwanted movement and also to create a snug comfortable fit. Attached to the bottom of the pouch are two straps which pass between the legs, split across the lower buttocks then up the sides to join the waistband, helping to hold the pouch down and in place.

There is also now a thong style jockstrap, similar to the athletic type, but only having one strap attached to the bottom of the pouch, this passes under the crotch, up through the centre of the buttocks attaching to the waistband at the middle of the back. Yes men, thong's are not just for ladies anymore! (To the uninitiated, a thong does take some getting used to).

Other types of jockstrap include the slingshot, this doesn't have any straps attached to the bottom of the pouch, and relies on the testicles to hold it in place. Not much good in cold climates (think shrinkage), or for active sports as it wouldn't take too much activity to come uncovered. There are also suspensories, similar to the jockstrap in a lot of ways with one main exception; above the pouch that holds the testicles is a hole which you place your penis through so that it hangs free from the constriction of the pouch, just be careful to control your thoughts and um... actions, when in public! This could be quite embarrassing.

Fashion jockstraps come in numerous waistband widths, and the pouches made from a variety of fabrics, anything from a fishnet type weave (which does not leave a lot to the imagination) to slinky fabrics such as Silk, Rayon and Lycra.

It's also rumored that the sports Bra for Women was originally conceived by an inventor who joined two Jock straps together.

Returning to the basic Jockstrap (if there is such a thing!), they also come in hard and soft cup varieties, a hard cup is to add protection when playing Ball and contact sports. In most cases the hard cup is an insert that sits in a double walled pouch.

BIKE has now gone on to sell over 300 million of them, and now has several rivals in the business, including Safe-T-Gard and Champion, who sell the traditional "athletic supporter," and other Companies such as N2N Bodywear, Go Softwear, J.M. and Zakk, who produce men's jockstraps as a fashionable and fun clothing.